Many people have wondered which of the big cats is called the black panther and if it is a separate species. A black panther is a leopard (Panthera pardus) or jaguar (Panthera onca), whose fur has a black color instead of the usual black rosettes on a gold-yellow background. Under favorable light conditions, the actually spotted coat can still be seen. These panthers are therefore not a species of their own, but a form of melanism.

The black panther is a so-called melanistic cat. Melanism is characterized by brown or black skin coloration. It is caused by the presence of an increased amount of melanin (dark pigment). Melanism occurs both in vertebrates and invertebrates. It is either a form of adaptation to the environment (protective function) or a medical condition.

Melanism occurs, for example, in foxes. The silver fox, for instance, is a melanistic form of the red fox.

If you’re interested in the subject of genetics, we suggest you explore the term allele (one of the forms of the same gene that differs in one or several nucleotides).

Which cats are black panthers?

The black panther is usually:

When it comes to smaller cats that may be melanistic, the jaguarundi (Puma yagouaroundi / Herpailurus yagouaroundi), which lives in South America, is worth mentioning. It is a small, 53-77 cm long cat with a weight of 3.5 to 9 kg.

It is also said that there are rare cases of black tigers, but we are not able to confirm this fact.


Black cougar – does it exist?

Are all individuals from one litter born black?

For people who are familiar with Mendel, the answer will be clear – not necessarily. In one litter there may be both black and typically colored (spotted) leopards or jaguars.

In nature, black panthers among leopards mostly occur in thick forests of south-western China, Myanmar (Burma), and Nepal. They also live in southern India – Travancore, and a north-eastern state Assam, located at the foot of the Himalayas.

Black leopards are also common on Java, and in the southern part of the Malay Peninsula, where they may be more prevalent than spotted panthers. These animals rarely occur in Africa, although there are some reports on the presence of black leopards in Ethiopia (former Abyssinia), in the forests of Mount Kenya, and in Aberdares. One of the black leopards was recorded in the equatorial forests of Cameroon.

The fur color of the black leopard

The fur color of the black leopard is a mix of colors: blue, black, grey and purple.

In zoos, black panthers are mostly represented by a leopard, and rarely by a jaguar. Black leopards in captivity have been selectively bred over years. These cats are smaller and have more delicate appearance than spotted individuals. Black leopards are also characterized by lower fertility.

In the case of the jaguar, melanism is a dominant feature (see above). Therefore, the offspring of black jaguars may be spotted or be black as well. However, spotted parents can only have spotted offspring.

The jaguars whose both parents are dark, are practically black, while the offspring of a mixed couple (a spotted jaguar and black jaguar) is charcoal, not black. In such individuals, spots may be also visible, as in the picture below.

The black jaguar was considered a separate species by the indigenous people of the regions in which the animal occurred.

Don’t be fooled by fake pictures of black lions. Below we present an example that circulates all over the Internet as a single picture of a black lion.

Remember – there are no black lions, but there are white lions. 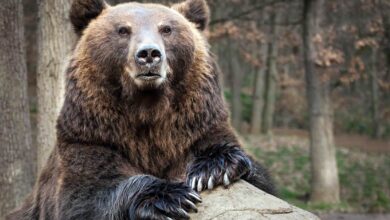 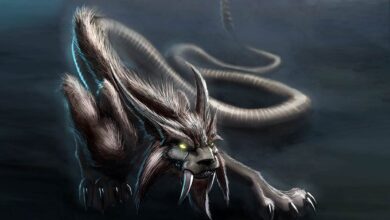