The Megalodon is a prehistoric shark, which was at the top of the food chain from 28 to 1.5 million years ago, that is, from the Late Oligocene to the Early Pleistocene. Due to its huge size and powerful jaws, it was unrivaled. So what was the cause of its extinction? Or maybe – as some conspiracy theory advocates still believe – megalodon was such a supreme predator that it still lives in the depths of the oceans?

Traditionally it is believed that megalodon’s genus is Carcharodon. Such affiliation is made mostly because of the dental similarity to other species of this particular genus e.g. the great white shark (Carcharodon carcharias). In 1923 a theory claiming that megalodon should be rather associated with the Carcharocles genus emerged, mainly due to its evolution process. Therefore the classification of the megalodon still remains unclear.

Megalodon`s fossil finds indicate that it was a cosmopolitan species, which could easily adapt to various habitats. As a result, it lived both in the coastal waters and in the depths.

Apparently, these animals` habitat depended on the stage of their life – adult megalodons rarely occurred near the coastline, contrary to the younger ones.

Although paleontologists have not yet acquired a well-preserved skeleton, they have managed to find an almost complete dental structure, which allowed them for excellent jaw reconstruction.

Megalodon had four types of teeth and a total of 276 teeth in its jaws, arranged in five lines. Paleontologists suggest that megalodon’s jaws were over 2 meters wide (6ft 7in).


It is indisputable that the megalodon was mighty and powerful an animal. In 2008 a team of Australian and American scientists, with the aid of a computer simulation, established the force of megalodon`s attacks on its prey.

It turned out that the bite force of this prehistoric shark could reach from 11 to 18.6 tons/cm2. Such an immense value is enough to crush a whale’s skull, which was a delicacy for the megalodon and was the foundation of its diet – popped like a grape…

As a reference, the bite force of the present-day great white shark is about 1.8 ton/cm2. More information on the strongest jaws in the animal kingdom you will find in one of our next articles.

Although sharks are often highly opportunistic predators, researchers claim that megalodon was a ‘perfect predator’. Its enormous size, powerful jaws combined with high speed and dexterity in water made megalodon able to eat almost every animal inhabiting the seas in its time.

Therefore dolphins, all kinds of whales including sperm whales, the pinniped, porpoises and even gigantic sea turtles all made up the megalodon’s menu.

In the case of breeding and adolescence, megalodons were not so different from present-day great white sharks. The females were ovoviviparous and young megalodons were 2 to 4 meters (6ft 7in – 13ft) long at birth.

If megalodon was indeed such a massive animal on the top of the food chain of predators inhabiting the Earth from the Oligocene (Tertiary) until the Pleistocene (Quaternary), what caused its extinction? There are at least a few different theories on that matter. Perhaps the progressive cooling of the climate or gradual disappearance of the great whales being its primary food source was the main reason.

Some people still believe that megalodons have not yet become extinct and are creeping somewhere in the great depths of the ocean. Be that as it may, there is no proof as of yet…

Many questions concerning the Discovery film production ‘Megalodon: The Monster Shark Lives’ have been coming to our office, so we decided to express our position regarding the matter.

The above-mentioned production is similar to the earlier Discovery picture on mermaids, which bodies have supposedly been found 😉 Both films have one in common – they both fall into the category of ‘docu-fiction’, the merged product of document and fiction.

Both were severely criticized by the scientific community as well as the public opinion for being fiction depicted as a document. The sheer fact of such films being produced is not as much concerning as its emissions on the channels formerly recognized as professional, not fictional. Additionally, the Siren program was obviously a fictional concept, while in ‘Megalodon (…)’ the information about it being fictional is barely noticeable. After the first emissions of the original production, a talk-show was hosted, in which people were asked if they believe that megalodon is actually still alive.

Obviously, the Discovery Channel was defending its concept, which misleads numerous viewers, explaining that if 95% of the ocean depths have not yet been explored then who knows if the megalodon is really extinct (Michael Sorensen, executive producer: ‘It’s one of the most debated shark discussions of all time, ‘can Megalodon exist today?’ It’s (the) ultimate Shark Week fantasy. The stories have been out there for years and with 95 percent of the ocean unexplored, who really knows?’), with little success.

Yet judging by the sent-in questions, this story has not been presented in the right context and many viewers still perceive it as a documentary, concluding that megalodon is in fact still alive.

Megalodon surely is not the largest animal ever to live on Earth. However, establishing its size was not easy. The first attempt took place as far back as 1909. Based on the jaw reconstruction it was assumed that megalodons may have reached even 30 meters (98ft 5in) in length. Yet over the years, this value has undergone a change.

In 1973 researchers noted that the height of the largest tooth enamel in a megalodon’s jaw may be intertwined with its total body length. Based on numerous samples it was concluded that megalodon had had a length of about 13 meters (42ft 8in).

In the 90s scientists realized that teeth are not such a great reflection of the body length, as it was originally stated. So the method was modified to measure the linear dimension of the tooth in relation to the total body length. As the largest megalodon tooth ever found was 16.8 cm (6.7 in) long, the megalodon`s length was estimated to be 15.9 meters (52ft 2in).

In 2002 a new theory linking the tooth`s width with the body length was developed. Every centimeter of its width was assumed to be equivalent to 1.4 m of length. Because the largest tooth was about 12 centimeters (4.7 in) wide, megalodon reached a total length of 16.5 m (54ft 2in).

Presently it is believed that megalodons could be over 16 m (52ft 6in) long – the biggest fossil find examined with the XXI-century method indicated it to be 16.8 meters (55ft 1in).

Megalodon`s body weight obviously depends on its length, which the scientist tried to estimate for almost a century. However if we assume that this prehistoric shark was really about 17 meters (55ft 9in) long, it could easily weigh around 59 tons.

One of the theoretical models assumes megalodon`s length to be 20.3 meters (66ft 7in) and its weight to be even 103 tons. 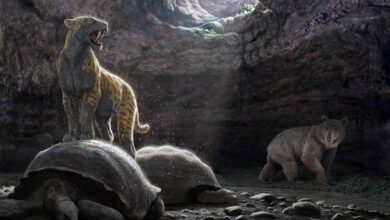