Elephant seals – there are only two species of these seals. Males are distinguished by a mouth resembling an elephant’s trunk and huge dimensions. There are some differences between the northern and southern species, but they share the uniqueness, strength, and character of a Spartan.

The northern elephant seal lives in the Eastern Pacific Ocean. The feeding grounds are located from the northern part of Baja California in Mexico to Vancouver Island. Males migrate to areas around Alaska and British Columbia, while females travel to western Hawaii.

The southern species is larger than the northern species. However, this applies only to males, because females of both species are very similar in size, and this results in an even more pronounced sexual dimorphism in the case of southern sea elephants. Males have proboscis on their mouths – in individuals from the south, they are wider.

The eyes are large, round and black. Like all seal species, sea elephants have fins instead of limbs. They have a silver or dark gray coloration that turns brown-yellow.

The caudal fin is “made” of hind limbs, each with 5 toes connected by an interdigital webbing. Thanks to its caudal fin, the sea elephant swims very agile, increasing its speed. The pectoral fins are used minimally in swimming. More use is made of them on land – elephant seals can move very fast on them.

At short distances on land, the elephant can reach speeds of up to 8 km/h () 5mph. Therefore, no worries, it would not catch up with us 🙂

The elephant speeds up on land when it wants to catch up with a female, reach water or catch an intruder.

Puppies are born covered in black fur. It is not adapted to water, but protects against the influence of cold air.

Elephants have whiskers (sensory hair) on their snouts to better locate food at depth.

Sea elephants dive many times a day, each time for about 20-30 minutes. They dive at a depth of 400 – 1000 meters (1,300 – 3,300 ft) in search of squid and fish. The dive sequence, timing, and depth are more efficient than most cetaceans. This is due to non-standard physiological changes common to all marine mammals, but in sea elephants, they are the best “refined”. Diving strategies are based on increasing the amount of stored oxygen and reducing its consumption.

The record-breaking observed diving depth of a male sea elephant was 2,000 meters (6,560 ft), and the duration was 2 hours.

During the breeding season (December to January), elephant seals come out of the water and move to terrestrial habitats. Males show up earlier to fight for the right to create a harem. The bigger the male, the greater the privileges and the higher the rank in the community. Only the largest males will have access to females.

The dominant individual creates a harem composed of several or a dozen females (on average, from 30 to 100 cows in one harem). The weakest males are not entitled to their harems, but may attempt to mate with females belonging to the harem of another male that has moved away from its “partners”.

Males come to terrestrial habitats and stay there for about a month to guard their territories. It is associated with a monthly fast, during which nutrients will be extracted from a thick layer of fat. Males do not fight each other to the death, but their clashes are very bloody, resulting in deep wounds and numerous scars. Often the weaker, smaller, younger and less charismatic males are driven out without a fight.

Caring for the young

For 5 weeks, females that come to the habitats give birth to young, nurture and feed them for about 4 weeks (lactation lasts about 23 days). In the last days of lactation, females enter the estrus period. Gestation lasts 11 months. After giving birth, the female can become very aggressive, defending her young from other females.

Mothers take care of the young for about a month, then suddenly wean them 2 months before leaving them. The abandoned cubs gather in groups and stay there for about 12 weeks. During this time, they learn to swim and hunt, gradually moving away from their habitats. The color and structure of the coat change. The young reach up to 40 kg (88 lb) in weight at birth.

By the time of weaning, their weight can reach up to 120 – 130 kg (265 – 287 lb). On the other hand, mothers lose their pounds during this time, because they do not eat during the lactation period.

Sea elephants can communicate. The males snort at each other, making sounds similar to an engine to scare their rival. Females make specific sounds, responding to the calls of the young. A pulsating noise means that the female feels threatened by another female, male or foreign pup. The cubs make sounds to or nudge their mother to let them suck milk.

Sea elephants emit low-frequency sounds. Thanks to them, the hierarchy in crowded herds is maintained.

Sea elephants are capable of very long journeys. Based on observations, they are known to be able to travel a distance of 29,000 kilometers (18,000 mi) in 11 months (almost like Captain Nemo :)).

The sea elephant – the largest predator

However, it is problematic whether we can consider that the sea elephant is a land mammal, since it spends most of its time in the water and only has a mating season on land. 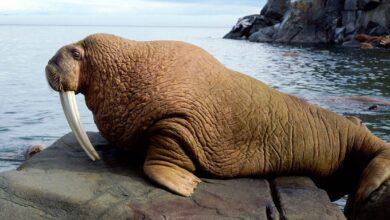