In a Disney movie “Lady and the Trap” Siamese cat was presented as a villain. In reality, it is human’s best friend. However, its owner should be able to fully accept and love its extroversion and to devote his or her time to it. Moreover, he or she should be ready to let it sleep in his or her own bed. 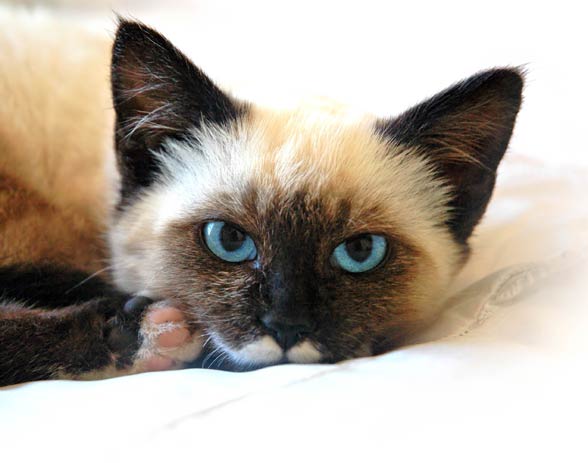 The history and origin of the breed

The characteristic cats from Siam were mentioned for the first time in manuscripts called “Tamra Maew” believed to have been written from the 14th to the 18th century. In the 19th century, Siamese cats constituted the object of interest of i.e. an American president Rutherford B. Hayes and a British consul in Bangkok, Edward Blencowe Gould.

Those exotic cats’ coloration and body structure were the most impressive although not everyone thought so. Some people described Siamese cat as “an unnatural nightmare of cat”. During the next years of the 19th century, the breeders imported few Siamese cats. Those cats that came to the Great Britain constituted a genetic basis for the modern British specimens.

Original Siamese cats were medium-size. Their body was elongated but also muscular. Their head was wedge-shaped and there were big ears on the top of it.

Although the first breed standard was set in the end of the 19th century, it was repeatedly modified over the years. It indicates that the modern Siamese cats hardly resemble their ancestors. The cats from Siam were slender but in the same time also muscular, they looked more like the modern Burmese cats.

Today’s Siamese cats are slim, elongated, have thin limbs and whip-shaped tail. Pronounced muscles is the only feature that they have in common with their ancestors.

In the 1980s, due to the changes in appearance, the standard specimens disappeared from the shows. However, some breeders (mainly from the Great Britain) have produced and registered standard Siamese cats in the felinology organizations. As a result, two varieties evolved: the modern variety called show-style and the traditional variety (they both have the same ancestors).

Modern Siamese cats have elongated, muscular and cylindrical body. Their head is wedge-shaped. They have big, light blue, almond-shape eyes. They have widely-spaced ears that are relatively large. Their neck is long and svelte.

One-layered coat is short, shiny and adheres tightly to the body. It is pointed, therefore a face, paws and a tail are dark, and the rest of the body is light. The coat coloration together with blue eyes tell it apart from a closely related Oriental Shorthair.

Siamese cat’s pointed coloration is a form of a partial albinism, which constitutes a genetic mutation of an enzyme involved in melanin production. This enzyme is sensitive to the changes of temperature. As a result, a dark coloration appears in the coolest part of the body – on the face, limbs and tail. Siamese kittens are white or cream at birth, the dark points appear after a few months.

Siamese cats become darker with time, just like Ragdolls. Moreover, the specimens living in warm climate have lighter coloration than those in cool climate. Within the breed, there are also such coloration patterns as lilac, chocolate, light blue and tabby. Due to the crossbreeding, there is also tortoise-shell (black-red) coloration and colorpoint copper-cream. All the varieties are accepted by felinology organizations.

Siamese cats love spending time with people. They are extrovert and intelligent, therefore they like being around humans. However, they usually create a strong bond with only one person. On general, they are loving and devoted. They are fun-loving and are very active, therefore they require a constant supervision. This is why they are sometimes said to be more like dogs.

Siamese cat is rather noisy. It makes loud and low purrs, which constitute the way of communication with its owner.

It is a socialized cat. It observes its owner’s moves and often follows him or her. It likes sitting on its owner laps and sleeping in its bed at night. It is quite a demanding animal, therefore if somebody is not affectionate towards animal or spends a lot of time out, he or she should not have Siamese as a pet.

In case you work a lot, it is recommended not to leave a Siamese cat alone without any activity. It is worth buying some cat toys in order to ensure it physical and mental stimulation. However, when it is left alone without any toys, it may as well find some itself, like for example a toilet paper roll. It may sulk if its owner does not spend enough time with it.

Siamese cats are prone to health issues, mainly to gastrointestinal problems and mammary tumors. They are also quite often diagnosed with the progressive retinal atrophy.

The genes responsible for albinism are also responsible for Siamese cats’ blue eyes which are deprived of a tapetum lucidum. This genetic mutation contributes as well to the creation of abnormal neurological connections between the eye and the brain. As a result, many Siamese cats may be cross-eyed.

Due to the lack of the tapetum lucidum, those cats may have a reduced vision at night. As a result, Siamese cats are dependent to people who must give them food because their hunting ability is affected.