Vanishing lakes, hot springs, ghost islands, totemic animals … These are just a few things characteristic of the place we are going to tell you about. There are nearly 70 species of mammals here, the health and survival of which depend on the existence of the park’s institutions. Therefore, great emphasis is placed on making visitors to this unique place treat it like an old friend’s house, where we behave with respect and leave no traces other than fingerprints.

We direct our attention to Canada, and more specifically to the province of Alberta. Jasper National Park is located in the Canadian Rockies, which is in turn part of the Rocky Mountains.

The park was founded on September 14, 1907. At the beginning, it had the status of a forest park. It was not until the 1930s that it was renamed a national park. The name Jasper was given in memory of Jasper Hawes – a man running the business of the so-called North West Company.

The area of ​​the Park is full of rock formations and mountainous terrains. Rugged and beautiful mountains coexist with delicate ecosystems, rich flora and fauna, numerous waterfalls, lakes, rivers and streams, as well as hot springs. Elements of the landscape are also limestone caves and canyons.

It is full of animals typical of the North American continent: grizzly bears, elk, Canadian lynx, coyotes, Canadian wolves, pumas. We also meet animals adapted to the harsh climate, including: wolverines, caribou, mountain goat. The area is rich in small and large rodents, such as beavers and marmots. The birds include the symbol of the USA – the American white-tailed eagle, as well as the golden eagle, the Great horned owl and the spotted eagle. We can find here ravens, grey jays, clark’s nutcrackers, spruce grouses, white-tailed ptarmigans, Bohemian waxwings, evening grosbeaks.

We cannot omit the thousands of species of plants and insects (of course, we will not list all of them here). The vegetation of Jasper National Park is formed into vast forests and meadows.

In addition to mountainous areas, we can admire numerous valleys, going for a short or long walk – there are almost 1000 km of hiking trails in the park.

The original name is Spirit Island. The island, or rather an islet, is located in Maligne Lake. Currently, the Island of Spirit is one of the most attractive points in Jasper National Park. Probably everyone who came to visit the Park wants to see this romantic place, shrouded in mystery. You can even take a cruise on the lake and set foot on this small patch of land, covered with tall conifers.

The name of the place is related to a certain history, created by the first inhabitants of the local areas (of course, we are talking about the Indians). Legend has it that a pair of lovers from two warring tribes met on this island. The girl’s father found out about her hidden relationship and forbade meetings with her beloved. However, the broken lover still came to the island, however, believing that the girl would eventually come back. However, she never came, and he died on the island where his soul resides to this day.

About 7 km (4.3 mi) long, Medicine Lake is rather shallow. It is considered part of the Maligne River Valley.

The unusual feature of the lake is that the flowing water… disappears. However, we are not dealing with magic or aliens, but with mundane geology. A significant part of the water flows out of the reservoir through the network of underground caves. Therefore, it comes to the so-called drain. Large amounts of water flow into the lake and equally large amounts flow underground – about 24,000 liters (4,000 gallons) every second.

In late spring and summer, the lake has the most water – water flows from local streams, so the water level drops slightly. The reservoir is full. On the other hand, it becomes the shallowest in autumn. The water level then drops drastically.

This natural underground system is one of the largest in the country and in the world.

Cyclists and hikers will find a great place for excursions here. Numerous tourist routes make it easier for tourists to move around the Park. Interestingly, many of the routes that function today were created by wild animals. The first settlers and travelers began to use them as well. This was the beginnings of today’s extensive network of footpaths.

A total of 998 km of trails stretch through the Jasper National Park. We can also find 82 camps here.

When is the best time to visit the park?

The park is open all year round, but the weather and nature are most beautiful at the end of summer and early autumn. The ideal time for photographers is autumn, when the wind softens and the air becomes as clear as glass. Fall is also the fire season.

It is recommended to go out to nature early in the morning or late in the evening, preferably in spring or fall. During this period, it is easier to meet large mammals such as bears and elks. Between August and September, newcomers can admire fights between male moose. This is mainly done near the Athabaska River.

Summer is also the camping season, which lasts until late autumn.

Winter lovers will also find something for themselves. The areas of the Park are ideal for skiers and snowboarders.

Sun bear - the smallest bear in the world 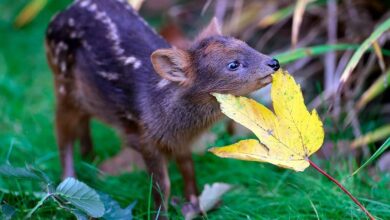