Its closest relatives – the giant short-faced bear (Arctodus simus) and the  Florida spectacled bear / Florida cave bear (Tremarctos floridanus) – had long ceased to rule on Earth. The Andean bear, however, inherited their characteristic feature – a short, wide snout, which can also boast of the sun bear (Helarctos malayanus).

In rare cases, it has been found in eastern Panama (Central America), but virtually the entire population limits its range to the northern and western parts of South America, from western Venezuela, through Colombia, Ecuador, Peru, to Bolivia and northwestern Argentina. It lives almost exclusively in the Andes.

Before the population fragmented in the last 500 years, the species was considered very adaptable to a variety of habitats as it lives at different altitudes, including cloud forests, high-altitude grasslands, dry forests and scrub deserts. However, its favorite species is very humid mountain forests, because thanks to the high humidity, plants that are the best food growing there.

Medium-sized bear covered with blackish, long and fluffy fur, although individuals may differ in color, the shade of the coat varies between deep black, dark brown and even red. On the face, around the eyes and in the upper part of the chest, there is a distinctive beige or ginger-colored mark in the shape of glasses (hence the alternative name – spectacle bear), each individual has a unique pattern, thanks to which individual bears can be distinguished.

Compared to other modern bears, the Andean bear has a round face with a relatively short and wide mouth. According to scientists, extinct bears from the subfamily Tremarctinae, which also includes the Andean bear, had wide and massive snouts because they were adapted to a meat diet. In spectacled bear, such a structure of the head and mouth has little to do with the diet, because it prefers to eat plants.

Unlike its other cousins, the Andean bear is almost entirely herbivorous. It feeds on cacti, pineapple, palm nuts, bamboo, sunflowers, fallen fruit and palm leaves. Sometimes it tears off the top part of the bark to get to the second layer.

Many of these plants are hard to digest or difficult to open to most animals, so there is little competition and the animal does not have to worry about food supplies. In order to cope with problematic delicacies, it has been equipped with the largest zygomatic mandibular muscles in relation to body size.

In addition, it has the shortest snout of any living bear, which makes it similar to the giant panda (Ailuropoda melanoleuca). It is therefore no coincidence that both species are famous for eating virtually inedible plants.

It is also distinguished from other bears by its teeth – fourth premolars are adapted to cutting through hard fibers. This allows it to grind, cut and crush plant material. Therefore, it also eagerly eats sugar cane, honey, corn, and blueberries. When food is plentiful, approx. 9 individuals can live side by side.

It tastes meat very rarely, but if it does, it chooses llamas, deer, cattle, horses, rabbits, mice and birds that nest on the ground.

Sometimes accused of killing livestock, especially cattle, and destroying corn plantations. Indeed, it happens that an animal gets used to the taste of cattle meat, but does not kill it, but eats the carcass, so farmers who find the remains eaten believe that the cause of death was an attack by a bear.

It belongs to one of the few members of the family with a predominantly arboreal lifestyle (other examples are: the American black bear (Ursus americanus), the Asian black bear (Ursus thibetanus) and the sun bear (Helarctos malayanus), mentioned in the introduction).

In cloud forests, it can be active both during the day and at night, but in the Peruvian deserts it sleeps during the day. Its survival in the vicinity of humans depends primarily on its ability to climb the tallest trees, on which it builds nests to help hide and serve as a pantry or lair.

It leads a solitary life, having a tendency to isolate itself from other individuals – thus avoiding competition, because it is not territorial. It happens, however, that in food-rich areas these bears feed in small groups. The size of the area where one individual resides varies between 23 – 27 km2 (8.9 – 10 mi2) for males and 7-10 km2 (2.7 – 3.9 mi2) for females. In the dry season, these areas shrink.

When encountering humans or another bear, it shows submission and caution, unless the intruder is perceived as a threat to the female or her offspring – then it is better to be afraid, because mothers are able to attack.

In adulthood, it does not have any natural enemies, but the young often fall prey to pumas (Puma concolor) and jaguars (Panthera onca), although the latter shows different habitat preferences, rarely overlapping with bears. In addition, the Andean bear effectively avoids the areas of the spotted cat 🙂

In general, however, little is known about the spectacled bear despite being one of the largest land mammals in South America.

It can probably reproduce at any time of the year, but its breeding peak is between April and June, which is the rainy season when the fruit massively ripens. It creates a relationship that lasts 1-2 weeks, during which it often copulates with a partner.

After 5.5 months of pregnancy, i.e. in the dry season, from 1 to 3 young are born (quadruplets are rare). The newborns are blind and weigh between 300 and 330 g. Although this species does not give birth during the hibernation cycle, as North American bears do, they give birth in similar places – small caves. When the baby bears begin to see and walk, the mother leaves the safe hiding place with them.

The size of the litter is related to the weight of the female and the amount of available food (especially ripe fruit). The mother looks after the young for about 1 year, then they become independent. However, they will reach sexual maturity much later, in 4-7 years of age. Unfortunately, this information is based solely on observations of captive individuals. 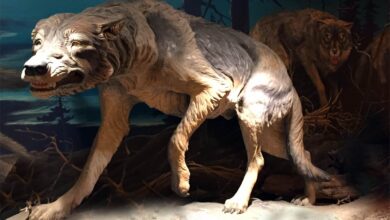